Myanmar at a Crossroads - Myriam Roccatello and Aileen Thomson 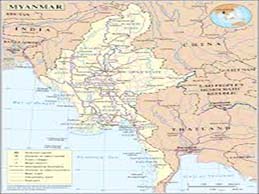 ABSTRACT: This paper in a first part shows how 2015 marks an important step in the Myanmar’s peace process, with a genuine political settlement for the first time and new elections. The reasons of the contemporary and past difficulties of the political situation in this Country are illustrated, in particular the denial of equal rights to the various minority ethnicities within a country separated in seven autonomous states, some of which enjoy, as a leg of the colonial rule, much more self-governance than the central, Burman-majority areas.

Indeed, during the process of independence, there was, in 1947, an attempt to solve these difficulties, but it failed with the assassination of the protagonists of the negotiations which had brought to an agreement with the Kachin, Shan, Karen and Chin ethnic communities. The subsequent armed conflict led to a gradual Burmanization of the Myanmar’s society and to a long period of hard repressions, with forced relocation and destruction of entire villages, torture, sexual violence, and shoot-on-sight policies without distinction between civilians and combatants. Finally, in 2010, Myanmar held elections to establish a new government under the 2008 Constitution, but political prisoners were impeded to run for office. Therefore, there was little opposition to the regime-backed Union Solidarity and Development Party (USDP), which emerged victorious in a vote that was widely considered unfair. However, moves toward democratization and economic liberalization paved the way for improved relations with the international community and opened to a transition towards a peace process.
The second part of the paper is focused on transitional justice in Myanmar. The biggest problem is now how to deal with the past, with the dilemma of revenge and/or only criminal justice, or forgiveness, or perhaps a middle path between revenge and amnesia, showing government leadership that the transitional justice the victims are advocating for is not a threat. So, acknowledgment and apology have long been the baseline demand for many victims of human rights violations in Myanmar, in view of the national reconciliation. The other big problem is the reparations for the victims of the serious violations. In the Authors’ view, there are two groups of victims who have a priority as to reparative measures : displaced persons (IDPs and refugees) and former political prisoners. The Authors acknowledge however that a challenge to providing a remedy for forced displacement is the large number of victims in front of the available resources in Myanmar. Yet the difficulty in identifying and remedying forced displacement does not justify policymakers in avoiding the issue; rather, it requires a creative look at the options for remedies.